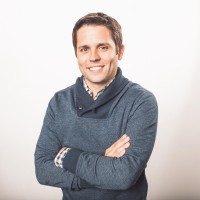 
An architect, designer, and entrepreneur, Brad Baer brings a wealth of skills and a passion for compelling spaces to his multifaceted role at Bluecadet. As Director of Strategy he is responsible for studio and project strategy, new business development, and environmental design, with a focus on the seamless integration of digital and physical experiences. A core member of the Bluecadet team since 2013, he has spurred company growth as well as client and community engagement.

Brad works closely with clients on project strategy and creative direction, leveraging digital design to best reach their audience and tell their story. He has collaborated with MoMA, the Shedd Aquarium, the Institute for Advanced Study, the University of Pennsylvania, Thomas Jefferson’s Monticello, and the National Park Service among other leading cultural and educational institutions. A gifted communicator, he excels at unifying cross-disciplinary creative teams including architects, exhibition designers, curators, web developers, and marketing executives. His experience as an architect perpetually informs his perspective on user experience, fabrication and assembly, and the integration of interactives into the built environment.

Brad received a Masters of Architecture from Yale University and previously worked for award-winning architecture firms KieranTimberlake, Pelli Clarke Pelli, and HNTB Sport on projects of every scale. While at Yale, he co-founded a company called Zokos to help people crowdfund dinner parties, which won the Connecticut business plan competition and was featured in Forbes, Mashable, and The Washington Post. Brad recently served as an Adjunct Professor at Temple University, where he created a new course on Design & Entrepreneurship. He has lectured at technology and design conferences across the country and served as a visiting architecture critic at Princeton, Syracuse, Michigan State, and Drexel universities.

Born in a farm town in Central Illinois, Brad has since lived in Ohio, South Carolina, Iowa, Missouri, Connecticut, Rhode Island, and Rome. Brad and his wife Katie and their son Jack now happily reside in Center City Philadelphia where he is active in local organizations including the Friends of Chester Arthur Elementary, the Ed Bacon Committee, the Friends of the Rail Park, and the Yale Club of Philadelphia.