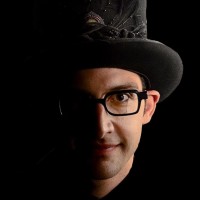 
David London is curator, storyteller, magician and producer based in Baltimore, MD, who has spent over 15 years creating theatrical and interactive experiences designed to spark the imagination and inspire new ways to see and engage with the world around us. Among his recent projects, he is curator of the touring exhibition Inescapable: The Life & Legacy of Harry Houdini and the related performance Houdini's Trunk, as well as the creator and performer of HUMBUG: The Great P.T. Barnum Seance and Time Travel Tours at the Peale. David is also an experienced arts administrator with 20 years experience working with and withing museums, galleries and theaters. Currently he serves as a Program Manager at the Greater Baltimore Cultural Alliance and Director of Operations at the Peale Center for Baltimore History and Architecture.

David discovered that he was a magician at 7 years old, and he has since spent over 20 years utilizing magic to tell stories and explore ideas. He has created 10 original theatrical magic productions, and regularly presents talks and workshops on both magic and "the show business" across the country.

In the last several years, David has shifted his energies to using his unique form of storytelling to illuminate history. Recently, he served as guest curator at the Jewish Museum of Maryland for INESCAPABLE: The Life & Legacy of Happy Houdini, and also created HUMBUG: The Great P.T. Barnum Seance and Traveling Museum, both of which are now touring the country.

In 2018, David completed construction on a 200-Year Time Machine, which he then used to offer 8 months of Time Travel Tours at The Peale in Baltimore, where he also serves as Chief Experience Officer.