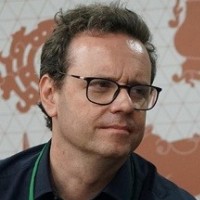 
A Principal Fellow of the Higher Education Academy, former Tate Research Fellow, and former chair of the UK’s national Museums Computer Group, Ross is also one of the founding Trustees of the Jodi Mattes Trust - for accessible digital culture. In 2018 he was listed in the Education Foundation’s ‘EdTech50’ – the fifty most influential people in the UK education and technology sectors.

Ross served on the International Scientific Advisory Board for ‘Learning 2.0’ managed by DREAM (the Danish Research Centre on Education and Advanced Media Materials) at the University of Southern Denmark, where in 2012 he was visiting professor. He now sits on the International Advisory Board for the €6mn, five-year, ‘Our Museum’ project, funded by Nordea-Fonden and Velux Fonden, as well as the UK Research and Industry’s Steering Committee of its £19mn digital cultural heritage initiative ‘Towards a National Collection’.

Ross’ recent books include: ‘Museum Thresholds: the design and media of arrival’ edited with Ruth Page and Alex Moseley (Routledge, 2018); and ‘The Routledge Handbook of Media and Museums’ (2019), edited with Kirsten Drotner, Vince Dziekan, and Kim Schrøder. Ross is the author of 'Recoding the Museum: Digital Heritage and the Technologies of Change' (Routledge 2007), and in 2010 published 'Museums in a Digital Age' (also with Routledge).

Ross leads the ‘One by One’ international consortium of museums, professional bodies, government agencies, commercial partners and academics, that together are working to build digitally confident museums. After a three-year national project in the UK (working with the Museums Association, Arts Council and National Lottery Heritage Fund), the consortium’s latest project now brings partners including the V&A, Science Museum and the UK’s Museums Computer Group into an action research collaboration with the Smithsonian Institution, American Alliance of Museums and Museum Computer Network.