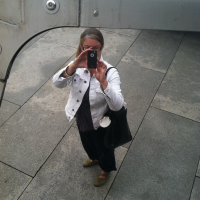 
Tracy Chapman Hamilton is an art historian and digital consultant. Her work has primarily focused on late medieval and early modern visual culture in Europe and the Mediterranean and their interconnections with the wider world, especially rooted in questions of gender studies, collecting, spatiality, and material culture. Her digital consulting and teaching, however, has delved into topics such as race and the urban landscape, colonialism and the refugee crisis, photography and the indigenous, mapping collecting patterns, the virtual exhibit, and augmenting the museum. Already well published, she is currently working on a variety of articles, The Ceremonial Landscape: Art, Gender, and Geography in the Late Medieval World, and a series of digital projects. The first, Mapping the Medieval Woman: A Digital Map of Women’s Lives and Patronage in the Global Middle Ages is in development for public use. The Premodern Women Artists and Patrons: A Global Bibliography is in a crowdsourcing stage as a Google doc that will eventually be migrated to a permanent, more stable site. One of the most compelling projects she has worked on this year is the virtual rendering of Virginia Commonwealth University’s campus gallery, “The Virtual Anderson." Built using game design and 3D modeling software as an initial site for its BFA Senior show the virtual space holds manifold future uses. Hamilton has held fellowships from the National Endowment for the Humanities, the Kress and DuPont Foundations, the International Center of Medieval Art, was a participant in the Kress Foundation Summer Institute for Digital Mapping and Art History at Middlebury College in 2014, and was one of the first two Mellon Fellows in the Digital Humanities at The Villa I Tatti, Harvard's University Center for Italian Renaissance Studies in 2016-17. She has held positions at Virginia Commonwealth University, where she is an Affiliate, the University of Richmond where she was an NEH Visiting Associate Professor, and Sweet Briar College, where she originally received tenure.