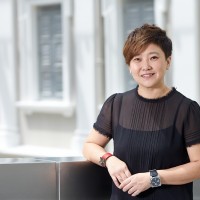 
Angelita Teo was appointed as Director of the National Museum of Singapore (NMS) in July 2013. Since becoming director, Angelita has been committed to reaching out to new audiences – whether through signature festivals, exhibitions that resonate with visitors, or quality regular programming. In her first year as Director, she succeeded in welcoming over 1 million visitors to the NMS: a record for any museum in Singapore. She was awarded the Public Administration Medal (Bronze) at the Singapore’s National Day Awards in 2014 in recognition for her exemplary performance and contributions towards the development of a vibrant cultural and heritage sector in Singapore.rnrnAngelita is currently overseeing the Museum’s revamp of its permanent galleries, scheduled to be ready in the final quarter of 2015. The makeover integrates contextual displays, multimedia interactives, contemporary art, and personal stories to update the historical narrative of Singapore presented.rnrnPrior to her appointment as Director of NMS, Angelita ran the Festivals and Precinct Development Division of the National Heritage Board from 2012 to 2013. She was in charge of iconic festivals such as the Singapore Heritage Festival and Singapore Night Festival, which showcase Singapore’s cultural vibrancy and celebrate our collective memories. Angelita continues to be the festival director of both these annual festivals, which together reach out to over 2 million visitors each year.rnrnIn 2008, as the Deputy Director of operations in NMS, she managed all aspects of the museum’s daily operations, including estates, exhibition and hospitality functions. This required her to work closely with artists, like Robert Wilson and foreign museums, like Museum Victoria to bring exciting travelling shows to Singapore. She also supervised the museum’s business development team, which oversaw revenue generated for the museum through venue rentals, corporate memberships and events.rnrnFrom 2002 to 2007, Angelita served as the Assistant Project Director for the S$132.6 million (approximately US$88.4 million) redevelopment of the NMS. The project involved the conservation of the existing historic building – a National Monument gazetted in 1992 – and the construction of an ambitious new extension building. The redeveloped museum which reopened on 7 Dec 2006 is 20,296sqm in size with 4,600sqm of permanent galleries.rnrnAngelita’s expertise and influence in the cultural sector has involved her in several other cultural development projects, such as the National Gallery Singapore, and revitalisation of the Heritage Institutions – Malay Heritage Centre and Sun Yat Sen Nanyang Memorial Hall. She is further involved in projects that deepen community engagement in history such as the Singapore Memory Project, a whole-of-nation movement that aims to capture and document precious moments and memories related to Singapore.rnrnAngelita received her Bachelor of Arts in Anthropology from the University of British Columbia in 1995. She started her museum career as an Assistant Curator with the Asian Civilisations Museum in 1996. In 2011, Angelita pursued a Masters in Art Curatorship at the University of Melbourne under a full Singapore government scholarship from the National Heritage Board.rn