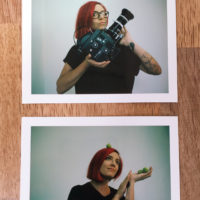 
Anna Chiaretta Lavatelli, the owner behind Solid Pink Productions, has been working in moving image for over 20 years as an artist, director, and producer. She has collaborated with museums across the country to create original content that illuminates the work of the most important artists and thinkers of our time. In her previous position as the Director of Digital Media at the Museum of Contemporary Art Chicago she managed and developed digital content and platforms, including the creation of dozens of short documentary films, the redesign of mcachicago.org, and over a half dozen websites to support contemporary art scholarship and visitor engagement with artists and exhibitions. There, she also began a lifelong commitment to accessibility with the co-founding of the Coyote Project to improve access to artworks for people with low or no vision and develop language for describing our world. Lavatelli is currently the digital strategist for MCN (The Museum Computer Network), while continuing to support Coyote and produce independent film and video productions.