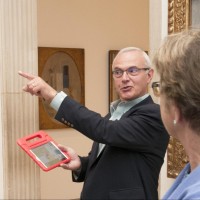 
Ariel is responsible for the Interactive Applications and the Website at the Philadelphia Museum of Art. The Museum's interactive team develops its own applications, as well as working with outside firms on a wide variety of permanent and temporary exhibitions. Before coming to the PMA, Ariel worked on interactive projects including the J. Paul Getty Museum's gallery interactive system in Los Angeles, the US Holocaust Memorial Museum's Learning Center in Washington, the National Geographic Headquarters Museum in Washington, the National Museum of Australia in Canberra and the Richard Nixon Presidential Library in California. Ariel is also a television producer of several PBS series, "A Taste of History," about 18th Century Revolutionary history and open-hearth cooking, and the geography game show, "Where in the World is Carmen Sandiego?"