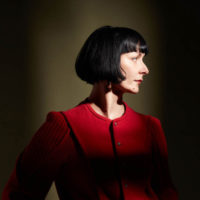 
Agnes Stauber is Creative Director for Digital Media at LACMA. Prior to LACMA, Agnes was the Head of New Media at the Fowler Museum at UCLA and worked at the J. Paul Getty Museum. Before moving to the United States, Agnes resided in Berlin, Germany, where she worked in exhibition design and film post production as a producer. She holds an M.A. in Communications and Media Production from the University of the Arts, Berlin.