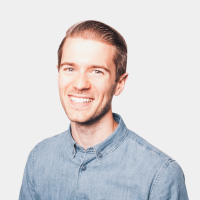 
Brett is an experience designer and maker, with a focus on creating narrative-rich, architectural-scale responsive environments. He is a Creative Director at Bluecadet, and a co-founder of the design agency's New York office. Accolades for Brett’s work include awards from IxDA, Core77, AICP, Fast Company, and Cannes.

Prior to Bluecadet, Brett was Director of Experience Design at Collins, a New York-based strategy and design agency. Brett led a range of projects at Collins–from designing speculative prototypes around the future of retail, to building an interactive rap video that users controlled with their face. The culmination of Brett’s work with Collins is a collaboration with the Museum of the Moving Image: a permanent exhibition about the work of Jim Henson. Brett’s team worked to express the curiosity, play, and craft of Henson’s work through architecture, design, and experience. And yes, Brett got to meet Big Bird.

Brett spent the first six years of his career at the LAB at Rockwell Group. At the LAB, Brett designed, prototyped, and built interactive installations for clients such as Google, Intel, JetBlue, the Cosmopolitan of Las Vegas, and the Whitney Museum of Art. These projects include “Plug In Play,” an 18-story interactive projection for the 2010 ZER01 Biennial; and the Google Cultural Institute’s media- and technology-rich Lab in Paris.

Brett is adjunct faculty at the New School’s Design and Technology program, and NYU’s Interactive Telecommunications Program. He regularly leads workshops on low- and high-tech prototyping, presenting at institutions including Rhode Island School of Design, Detroit's College for Creative Studies, and Iowa State. Brett lives in Brooklyn with his wife and cat, and splits his time outside of work between playing music and trying to bake the perfect sourdough loaf.