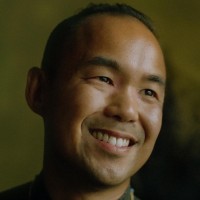 
Everything Adriel Luis does is driven by the belief that people can be politicized through surprising, imaginative and loving methods. Adriel was introduced to social justice via art. Since then, he has toured the world with iLL-Literacy, his hip hop and spoken word band dedicated to forming Afro-Asian coalitions on college campuses; collaborated with dozens of community organizations to rethink their missions with design and digital strategies; helped jumpstart OneBeat, a program that convenes musicians from throughout the world for cultural diplomacy; and co-founded Bombshelltoe, which works with artists to highlight marginalized communities who have been affected by nuclear history. Adriel now spends much of his time as the Curator of Digital and Emerging Media at the Smithsonian Asian Pacific American Center, where he pushes for emerging artists of color to be shown and paid fairly by museums. He has helped introduce Culture Labs — a model for art fairs built on community organizing principles. Adriel is at his best when he’s traveling the world, eating bomb ass cuisine and building bridges in the global Asian creative community. He’s based in a Washington D.C., has lived in New York and Beijing, but has never forgotten his roots in the California Bay Area. Know that. Find him everywhere as @DRZZL.