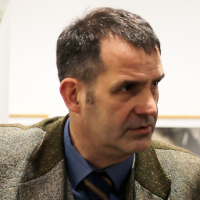 
Harald Kraemer is a wanderer between different worlds. His interest in analyzing, planning, designing, documenting, and archiving of digital cultures of knowledge is central for him and has influenced and enriched his life in many ways. As an art historian and media scientist with a life long passion for (collecting) contemporary art, photography and new media he is familiar with the traditional methods of the Humanities as well as Media Art/Design in Theory and Practice. As a systems analyst and pioneer in Museum Informatics he knows the methods of analyzing and planning complex processes, and through his education as curator and in museology he has been trained in perception, communication, and exhibition-making. In 1998 he started to design and produce multimedia applications for museums – both offline and online – to learn how interactive technology can create new pathways to knowledge.
His works include a wide range of new media projects like Vienna Walk Demo (prototype of an interactive online film realized together with Science Wonder Productions in 1998), Virtual Transfer Musée Suisse (interactive stories about 600 artefacts of the 8 Swiss National Museums in 5 languages: http://www.virtualtransfer.com), as well as Artcampus the award-winning learning course about methodology of art history (University of Bern) or an online introduction into the transliteration of Pin-Yin and Wade Giles for the University of Zurich (http://www.eastasianarthistory.com).

As Head of the MA program Curating Arts and Media at the City of Hong Kong's School of Creative Media Art, he has developed a hands-on curriculum based on critical analysis of exhibitions and time-based media for education, which leads to a self-responsible, ethical understanding of the role of a curator as 'Gestalter' (creator/designer) of knowledge environments. Previously, as Consultant and System Analyst for Museum Informatics and Media in Museums, he has worked on more than 60 projects with various museums, art and cultural heritage organizations, as well as universities including; University of Bern, Jewish Museum Berlin, Kunstsammlung Nordrhein-Westfalen in Dusseldorf, Museum of Applied Art in Vienna, Swiss Institute for Art Research (SIK-ISEA), Swiss National Museum Zurich, Zurich University of the Arts, and The Hong Kong University Museum and Art Gallery. As Storyteller, Creative Director and Project Manager he has produced more than 120 interactive narratives including Vienna Walk Demo, Art and Industry, Virtual Transfer Musee Suisse and Art Campus. He holds a PhD in Art History from the University of Trier (Germany) with a thesis on Museum Informatics and Digital Collections, and a diploma in Museum and Curatorial Studies from IKW Vienna. He has published more than 20 books and anthologies and over 150 articles and essays on contemporary art, new media, museums and documentation. H. Kraemer is currently working as an associate professor at the School of Creative Media of City University of Hong Kong and has been working on the completion of his research project Multimedia Classics - Hypermedia Hermeneutics - Transmedia Narratives.