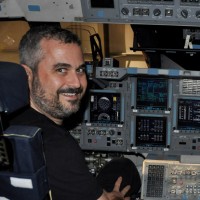 
An experience designer with a passion for science, Jeremy found a home at the California Science Center back in 2000 and never left. Located near Downtown Los Angeles, it is the West Coast's largest hands-on science center and the most visited museum in Southern California. As a member of the Exhibit Development Department Jeremy works on the concept, content and design of new exhibits. He is also the in-house web developer and manages the user experience of the Science Center's web presence. In his voluminous free time, Jeremy takes on freelance projects in graphic design, web design/development and scientific illustration. Jeremy is a graduate of the University of California at Santa Cruz, where he earned a BS in Physics, a BA in Art and completed a graduate program in Scientific Illustration.