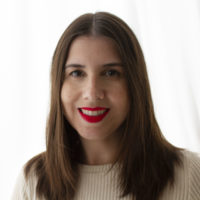 
Karolina Ziulkoski is a new media artist, designer, and curator. She holds a Master's degree from the Interactive Telecommunications Program at NYU and bachelor's degrees in Architecture (UFRGS, summa cum laude) and Advertising (PUCRS, Outstanding Student Award). Ms. Ziulkoski is currently the Chief Curator of the YIVO Bruce and Francesca Cernia Slovin Online Museum and Director of Digital at the YIVO Institute for Jewish Research. Before that, she developed interactive exhibitions for the American Museum of Natural History. She is a principal creator of Daemo, a Self-Governed Crowdsourcing Marketplace, a project of the Stanford Crowd Research Collective, and served as an adjunct professor at Rutgers University Visual Arts-Design program. Ms. Ziulkoski is the recipient, nominee and honoree of numerous awards, including the Inovapps award from the Brazilian Ministry of Communications, the Communication Arts Interactive Award, Webby Awards, VEGA Digital Award, Fashion & Beauty Clio Awards, Core77 Awards, and Lumen Prize. Ms. Ziulkoski is the creative director of the Museum of Municipalities, currently under construction in Brasília, Brazil, and her artwork has been shown in venues such as the New Museum, SPRING/BREAK Art Show, and Art Central Hong Kong. She was a member and a mentor at NEW INC, the New Museum's incubator for art, technology, and design in New York City.