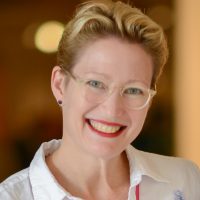 
Nancy Proctor is Chief Strategy Officer and founding Executive Director of The Peale, Baltimore's Community Museum, based in the first purpose-built museum in the U.S. Previously, Nancy was Deputy Director of Digital Experience and Communications at the Baltimore Museum of Art (2014-2016), Head of Mobile Strategy and Initiatives at the Smithsonian Institution (2010-2014), and Head of New Media Initiatives at the Smithsonian's American Art Museum (2008-2010). With a PhD in American art history and a background in filmmaking, curation and feminist theory and criticism in the arts, Nancy lectures and publishes widely on technology and innovation in museums, in French and Italian as well as English. She edited Mobile Apps for Museums: The AAM Guide to Planning and Strategy in 2010, and coordinated the publication of Inclusive Digital Interactives: Best Practices + Research for MuseWeb with Access Smithsonian and the Institute for Human Centered Design in 2020. Nancy served as Co-chair of the international MuseWeb (formerly Museums and the Web) Conferences with Rich Cherry, and edited its annual proceedings from 2012-2020.

Nancy created her first online exhibition in 1995 and went on to publish the New Art CD-ROM and website of contemporary art – a first in the UK – in 1996. She co-founded TheGalleryChannel.com in 1998 with Titus Bicknell to present virtual tours of innovative exhibitions alongside comprehensive global museum and gallery listings. TheGalleryChannel was later acquired by Antenna Audio, where Nancy led New Product Development from 2000-2008, introducing the company’s multimedia, sign language, downloadable, podcast and cellphone tours. She also directed Antenna’s sales in France from 2006-2007, and was part of the Travel Channel’s product development team 2007-2008.

As program chair Nancy led the development of the Museums Computer Network (MCN) conference programs 2010-2011, and co-organized the Tate Handheld conference 2008 & 2010 with Jane Burton. She started the MuseumMobile wiki and podcast series in 2008, was Digital Editor of Curator: The Museum Journal from 2009-2014, and is now on the Journal's editorial board, as well as on the Board of Directors of the Omnimuseum Project.