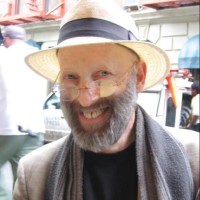 
Peter Samis is Associate Curator of Interpretation at the San Francisco Museum of Modern Art (SFMOMA). He attended the first ICHIM conference in Pittsburgh in 1991 and lived to tell the tale, then served as art historian/content expert for the first CD-ROM on modern art in 1993; taken together, these two facts make him something of a living fossil! Other fun events along the way with his most excellent SFMOMA Interactive Educational Technologies (IET) team: first implementation of multimedia PDAs in an art museum for SFMOMA's 2001 "Points of Departure" exhibition; three AAM Muse Awards in one year (2006) and a "Best of the Web" in the category "Innovative and Experimental" for "SFMOMA Artcasts" in 2007. More recently, the IET team produced "Making Sense of Modern Art Mobile", the museum's in-house mobile multimedia guide, which was distributed for free to visitors on the iPod Touch until the museum's closure for expansion in 2014. Recently, He has been scaling back his involvement at SFMOMA, passing the baton to his incredibly capable team so he can pursue other longstanding research interests in world views and meaning-making...even beyond museums!

Once upon a time Samis studied religion and anthropology at Columbia, Berkeley and in Paris, and went on to earn an M.A. in art history at U.C., Berkeley. Since then he has taught, curated, written, and been active in the development of myriad interpretive technologies for cultural heritage. He was a founding instructor in the TEC-CH Masters program at the University of Lugano, has served on the board of the New Media Consortium (www.nmc.org), and on advisory councils for numerous museum-focused initiatives. Together with co-author Mimi Michaelson, he recently celebrated the publication of "Creating the Visitor-Centered Museum" (Routledge, 2016). The book presents case studies of museums that have fused analog and digital approaches to make their collections more relevant to a broad audience; in parallel, it discusses the organizational changes most have gone through in their effort to achieve that end.