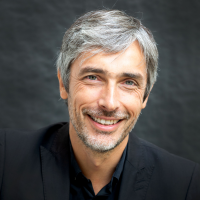 
Stéphane Bezombes has worked for over two decades in the design and development of high-end cultural digital projects. After earning his computer science engineering degree, Stéphane worked at as multimedia project manager for a CD-ROMs editor. He then worked at the Musée du Quai Branly as the chief multimedia project manager. He went on to create Reciproque in 2006. As an expert in exhibition techniques and media content production chains, he oversees the overall programming and implementation. As a designer, he supervises and manages the creation workshops and develops the teams’ skills. As a consultant, he analyzes and conceptualizes clients’ needs in order to submit proposals that help clients make informed decisions.