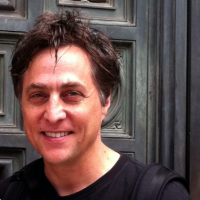 
Vince Dziekan is a senior academic and practitioner-researcher at Monash Art, Design and Architecture (MADA), Monash University, Australia. Vince’s work engages with the transformation of contemporary curatorial practices at the intersection of emerging design practices, creative technology and museum culture. The scope of these interdisciplinary investigations is reflected in his books, Virtuality and the Art of Exhibition: Curatorial Design for the Multimedial Museum (Intellect Books, UK; University of Chicago Press, 2012), and The Routledge Handbook of Museums, Media and Communication (co-edited with Kirsten Drotner, Ross Parry and Kim Christian Schrøder; Routledge, 2018). Vince has published widely in traditional, scholarly as well as non-traditional modes through his independent curatorial practice, including as founding curator of MWX, the exhibition initiative of Museums and the Web (United States), and through his international engagement in the field, as research advisor on ‘One by One: Building the digital literacies of UK museums’ (AHRC, UK) and adjunct to the newly established Institute for Digital Culture (University of Leicester). He is currently leading research programmes as general editor of The Encyclopaedia of New Media Art (Bloomsbury), and series co-editor (along with Ross Parry) of a new book series for Routledge, titled Critical Perspectives on Museums and Digital Technology.