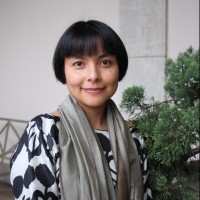 
Dr. Daisy Yiyou Wang is Curator of Chinese and East Asian Art at the Peabody Essex Museum in the United States. Prior to this appointment, Wang served as Chinese Art Specialist at the Smithsonian’s Freer Gallery of Art and Arthur M. Sackler Gallery, where she made curatorial contribution to a number of groundbreaking exhibitions, including the contemporary artist Cai Guo-Qiang’s first Explosion Event on the National Mall (2012), and Echoes of the Past: The Buddhist Cave Temples of Xiangtangshan, which employed digital imaging technology and video art installation to reconstruct the damaged sixth-century Buddhist cave temples in China. Wang has worked for the Shanghai Biennale, the largest international contemporary art exhibition in China, the Solomon R. Guggenheim Museum, the Museum of Fine Arts, Boston, and the Asia Society Museum in New York. Wang is the author of the first monograph on the founder of the American national museum of Asian art Charles L. Freer and his Chinese collection. In collaboration with a conservation scientist she won a Smithsonian Scholarly Studies Award to advance the field of Chinese lacquer research. As Chair of the China Program Committee of American Alliance of Museums, Wang founded the largest annual U.S.-China museum professional exchange program. With the goal of sharing best practices and developing new partnerships, the program has brought together over 500 American and Chinese museum leaders for site visits, lectures, panel discussions, and project meetings. Since 2009, Wang has guided the Smithsonian’s first fundraising initiative in mainland China, and the production of a dozen primetime programs by China’s national TV station featuring the Smithsonian’s collection. These programs were viewed by 1 billion people in China. Wang is the recipient of a Smithsonian Valuing World Cultures Award, a Smithsonian Post-Doctoral Fellowship, and a Getty Museum Leadership Fellowship. She has served as grant reviewer for the Getty Research Institute and the Smithsonian, and advisor to the Terra Foundation for American Art. Wang earned her B.A. in International Affairs and Law, M.A. in English Language and Literature from the University of International Relations in Beijing, and Ph.D. in Art History from Ohio University. Wang is also an internationally recognized simultaneous interpreter, and the translator of over twenty art historical articles and books.