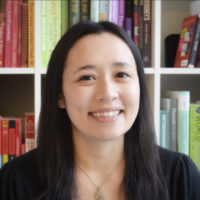 
Yukiko Stranger-Galey is the Exhibits & Design Manager for the Beaty Biodiversity Museum at the University of British Columbia, where she develops exhibitions that celebrate the wonder and diversity of the natural world. She holds a B.Sc. in Biochemistry from the University of Edinburgh and a M.Sc. in Microbiology from the University of Chicago. While working in the lab, she uncovered a passion for sharing her research with the public and embarked on a journey communicating science in different arenas. The opportunity to share the stories of the people, organisms, and objects in our world inspires her every day.rnrnIn her current role, Yukiko has developed and curated over 20 temporary exhibitions and is responsible for 500 permanent exhibits that draw from the over 2.1 million biological specimens that the museum houses. Her exhibitions have been recognised both provincially and nationally. Notable awards include: the British Columbia Museums Association Change Maker Award, the British Columbia Museums Association Innovation Award and the Governor General’s History Award for Excellence in Museums. Yukiko is also active in the museum, science communication, and women in science communities through regular presentations, publications and guest lectures at the University of British Columbia.